Type 2 diabetes is a global health issue affecting 414 million adults world-wide.1 Although the number of people being newly diagnosed with diabetes (the incidence) appears to be stabilising and perhaps even decreasing, the total number of people living with the disease (the prevalence) is increasing.2,3 The health consequences of diabetes place a strain on the quality of life for patients as well as on healthcare systems, so improving primary prevention (preventing the disease from developing in the first place) should be a priority for public health. However, which interventions strategies are most effective in achieving this remains an open question. 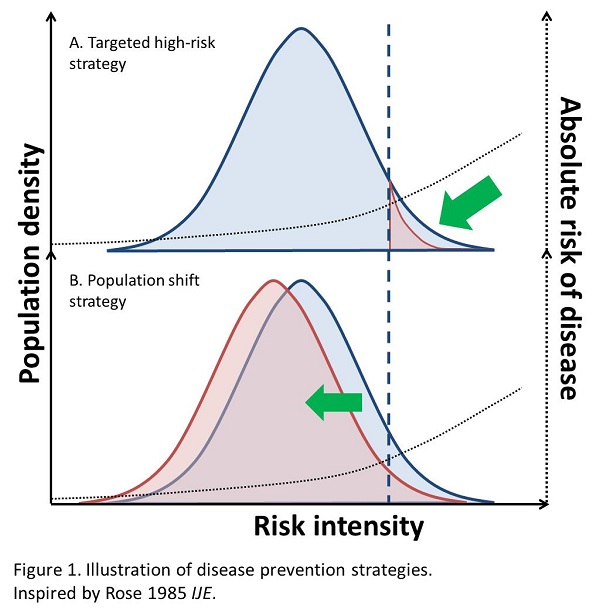 Prevention of type 2 diabetes using the high-risk strategy has been explored through many randomised controlled trials in people with hyperglycaemia and other risk factors, showing that intensive lifestyle interventions and weight loss are highly effective and can approximately halve diabetes risk5 in this group. However, since the threshold for who is considered to be at high risk of type 2 diabetes is somewhat arbitrary and that the proportion of people identified as being at high risk only constitutes a small part of the overall population at risk, there is rationale to explore prevention strategies focused on population shift as well.

Most epidemiological evidence of risk factors for diabetes and other chronic diseases comes from observational prospective cohort studies where an exposure to a risk factor is typically measured at one time-point in a general disease-free population, which is then followed up for occurrence of the outcome over a defined period. Such studies have yielded ample evidence for associations between several lifestyle behaviours and other risk factors and type 2 diabetes incidence, including protective effects of dietary fibre intake,6 moderate alcohol drinking,7 physical activity,8 body mass index (BMI) less than 25kg/m2 9 and non-smoking10. However, since these studies examine differences between individuals at only one point in time their results cannot be conclusively causally interpreted as support for a population shift strategy since we cannot rule out that unmeasured factors which influence both lifestyle behaviour and type 2 diabetes have distorted the results, so called residual confounding.

Ideally we would like to conduct randomised trials of interventions in the general population as well as in high-risk groups to understand if improving lifestyle behaviour, for example low physical activity or poor diet, could reduce diabetes occurrence in the general population which is not considered at high risk of disease. Unfortunately, such randomised trials are rare due to being very logistically challenging, costly, difficult to conduct, and in some cases unethical.

So how can we try to understand the potential of population shift of risk in the general population in the absence of randomised studies? One way is to use observation data to study people who change exposure status over time without a controlled intervention. To be able to do this you need repeated measures of both exposures and outcomes over time for large populations, and there are not many existing or on-going cohorts that have this kind of data available for analysis, and fewer that have used their data in this way. It is more common when having repeated measures of an exposure to analyse it as a time-varying exposure, meaning that exposure status is updated for individual observations at the time of the second (and possible third, fourth, etc.) measurement. This is an effective way to use the data, but the estimated effect is in relation to the absolute level of the exposure, and not in relation to change in exposure status.

Evidence from Studies on Change Within Individuals

Recently two studies from the VIPCAM collaboration between the University of Cambridge in the UK and Umeå University in Sweden have shed some light on the potential of population shift strategies for prevention of diabetes. Data from the Västerbotten Intervention Programme (VIP),11 a public health programme in northern Sweden that includes health examination every 10 years on a large population-based sample, were used to study change within individuals in exposure to risk factors and incidence of type 2 diabetes.

The VIP data were also used to estimate the public health potential of a population shift in risk to reduce the occurrence of diabetes by estimating population attributable fractions (PAF) which calculate the proportion of disease cases attributable to a particular exposure.

Results for type 2 diabetes show that:

In the US cohorts the Nurses Health Study I & II and the Health Professionals Follow-up Study data have been collected on lifestyle behaviour and diabetes every 4 years over a long follow-up period and these data have similarly been used to study changes in exposure and diabetes incidence.

Results for type 2 diabetes have shown that (compared to those who do not change exposure status over time);