Today, 22 September, 2021, Public Health England (PHE) have published the report Diet, Nutrition and Physical Activity in 2020: a follow up study during COVID-19. The study aimed to describe and assess the impact of the pandemic on the diet and physical activity of people in the UK by following up participants who had previously taken part in the National Diet and Nutrition Survey Rolling Programme (NDNS RP).

Participants in the study (363 children, 567 adults) completed up to 4 online dietary 24-hour recall using Intake24 to collect food consumption data. Recalls were completed in August, September and October 2020 during a period of relative relaxation of COVID-19 restrictions in the UK. The report shows that population intakes at this time were similar to those reported in previous years of the NDNS RP with intakes of fruit and vegetables, saturated fat, free sugarsfibre and some micronutrients failing to meet government recommendations.

Participants living in households that were worried about not being able to afford food in the next month consumed less fruit and vegetables, less fish, and more sugar sweetened soft drinks than participants from households that were not worried. However, there were no differences in reported consumption of confectionery, biscuits, buns, cakes and pastries, crisps and savoury snacks. Free sugars intakes tended to be higher in participants from households with lower food security and fibre intakes tended to be lower.

For a summary of the report findings on levels of financial and food security and changes to food shopping, preparation and consumption habits visit the NatCen website.

For each participant, their dietary data collected during August – October 2020 was compared with the dietary data collected when they originally took part in the NDNS RP between April 2016 and March 2020 (on average 2 years and 7 months earlier). Comparison findings for some foods are presented below. The full report also presents information on intakes of energy, macro and micronutrients. 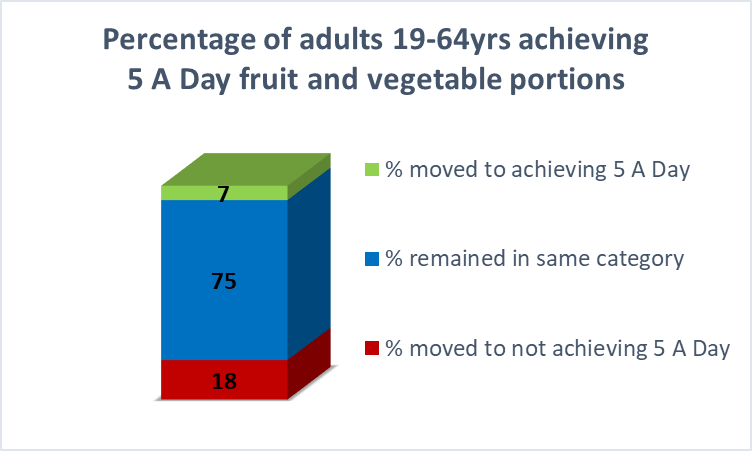 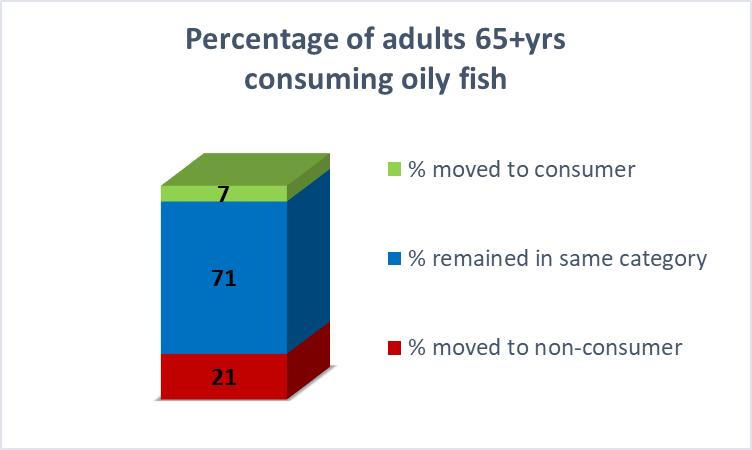 For sugar-sweetened beverages, there was a small decrease across all age/sex groups in the proportion of consumers between previous assessments and this study. This is consistent with a downward trend seen in the NDNS RP where the percentage of consumers of sugar-sweetened beverages has been falling over the years. The largest drop was seen in boys aged 11-18 where 24% moved from previously consuming these type of beverages to not consuming in this study, while 14% moved from not consuming to consuming. 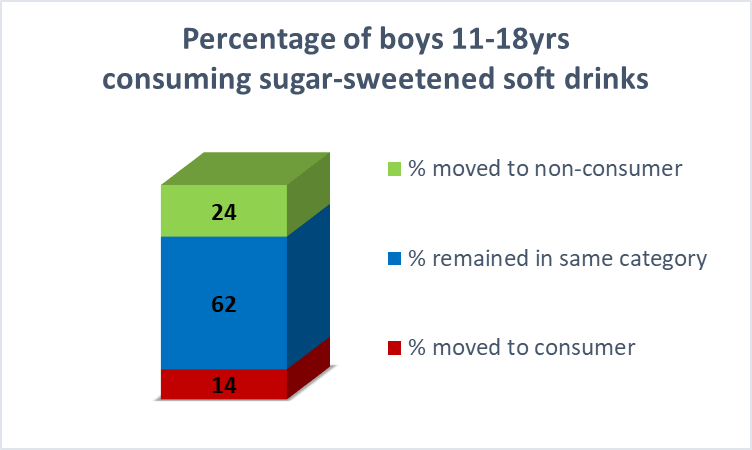 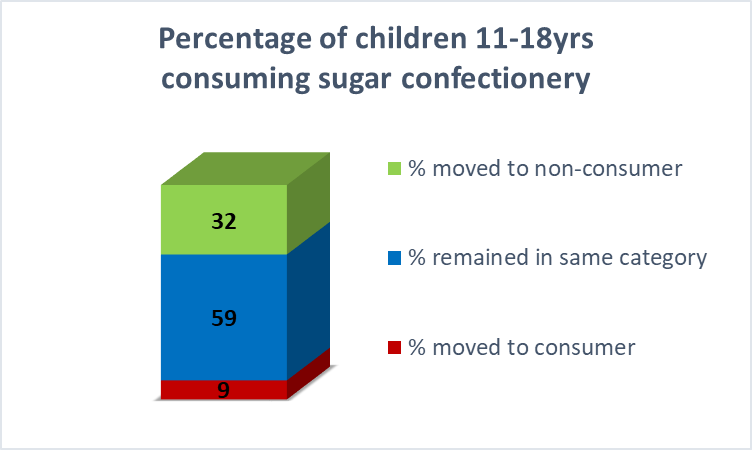 These results suggest there have been some changes in foods consumed by individuals between this study and their previous assessment. It is difficult to attribute observed changes to the pandemic due to the time gap and therefore other pre-pandemic changes to personal circumstances that could potentially impact on diet. In addition, for most participants, their original dietary data was collected using a paper food diary before the NDNS RP moved to Intake24 in October 2019. Initial findings from an evaluation of this change in dietary assessment method within the NDNS RP suggest there could be some differences in reported intakes and in the proportion of consumers in some foods including 5 A Day portions, sugar and chocolate confectionery and soft drinks.

In the study, participants aged 16 years and over completed a Recent Physical Activity Questionnaire (RPAQ) to assess their energy expenditure from physical activity and, like the dietary data, this was compared with their physical activity data collected when they originally took part in the NDNS RP between April 2016 and March 2020.

Reported activity was higher on average in this study than in the previous NDNS RP assessments for women but not for men. Increases in home activities (such as gardening and DIY) and leisure activity were the main contributors.

The Diet, Nutrition and Physical Activity in 2020: a follow up study during COVID-19 was funded by Public Health England and the UK Food Standards Agency and was carried out by a consortium comprising NatCen Social Research and the MRC Epidemiology Unit, University of Cambridge. The MRC Epidemiology Unit acknowledges the support of the National Institute of Health Research Cambridge Biomedical Research Centre (NIHR CBRC)