A study released today in Lancet Public Health examines the long term effect of 12 and 52 week commercial weight management programmes. The results show that the 52 week programme was more effective over two years. After five years some weight loss was maintained, and over a lifetime both programmes are likely to be cost-saving for the NHS.

There is good evidence that commercial weight management programmes such as Weight Watchers (WW) can help people to lose weight in the short term. However, no studies of this type of intervention have measured outcomes beyond two years, leaving uncertainty over the long-term impact of these programmes not only on body weight but also on rates of diabetes, heart disease, obesity and other conditions.

The WRAP trial recruited 1267 adults living with overweight and obesity and randomly allocated them to one of three interventions:

Participants were followed up for five years. Clinical measurements and self-reported data about their health was collected at the start of the study, then at three months, one year, two years, and five years.

One and two year results

At five-year follow-up, there was more uncertainty over whether there was a clear difference in weight between groups, but there appears to be some small, sustained weight loss from attending the WW programme. However, there was no difference between groups in other risk factors for disease.

We evaluated the costs of the interventions in comparison to their impact on healthcare costs and quality of life. Findings suggested that the 12 week WW programme offered slightly better value for money over five years than the other two interventions. It is likely, however, that any impact of weight loss on weight-related diseases will not be seen until after five years.

Researchers used statistics to estimate the impact of the three interventions on diseases and healthcare costs over a lifetime. They  found that the 52 week programme offers best value for money and may be cost-saving because of later reductions in weight-related disease.

The 12 week programme appears to offer best value for money in the short term. However, over a lifetime, the 52 week programme is likely to be cost-saving because the costs of the programme are more than offset by reductions in incidence of diabetes, cardiovascular diseases and other weight-related illnesses. 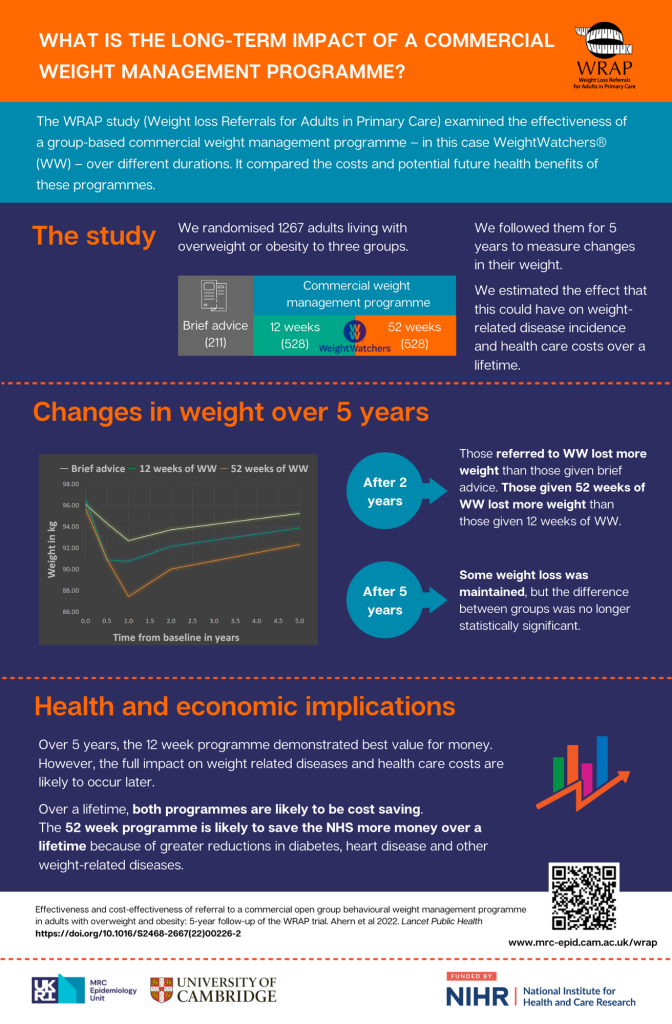