Nita Forouhi is a physician scientist and Programme Leader of the Nutritional Epidemiology programme of the MRC Epidemiology Unit at the University of Cambridge.

Nita Forouhi’s research is focused on the link between diet, nutrition and the risk of diabetes, obesity and related disorders. Her major research interests include:

Nita Forouhi leads the Nutritional Epidemiology programme, and she is Professor of Population Health and Nutrition. She is also the Deputy Lead for the Diet, Nutrition & Lifestyle Theme of the NIHR Cambridge Biomedical Research Centre. She is an NIHR Senior Investigator. She is a Principal Investigator on the EU-FP6 funded EPIC-InterAct Study, the Fenland Study, the SABRE Study, and the EU-FP7 funded InterConnect Project and EPIC-CVD Study. She is also an Honorary Consultant Public Health Physician with Public Health England.

Nita is the organiser of the WHO/IDF Cambridge Seminar for increasing understanding of the epidemiological and public health aspects of diabetes, she leads the Unit’s postdoctoral forum, is module lead on the University of Cambridge MPhil in Epidemiology and MPhil in Public Health, and is an educational supervisor for the Eastern Deanery Public Health training programme.

Nita is committed to promoting a positive work culture and the equality agenda through her her role as the Director of Organisational Affairs at the University of Cambridge School of Clinical Medicine. She chairs the Clinical School’s Athena Swan Governance Group, and as the Athena Swan and equality and diversity lead for the MRC Epidemiology Unit. She is also a member of the University of Cambridge race equality charter team.

Nita delivered the Diabetes UK Rank Nutrition Lecture in 2017, the nutritional epidemiology research programme was awarded the Vice-Chancellor’s Best Impact Award in 2016, and she has frequently engaged with the media to promote knowledge in the area of diet and health. Her expert commentary has been quoted by a number of national and international news outlets, including the BBC News Online,  Daily Mail, Guardian, and CNN, she has been interviewed by BBC Radio 4’s Today Programme and BBC One’s The One Show, and she has appeared on BBC Two’s Trust Me I’m a Doctor and BBC One’s The Truth about…fat. In 2017 she was interviewed by the BMJ for BMJ Confidential, and in 2019 by the MRC for their Career Inspirations podcast.

Nita was a series advisor for the BMJ’s Food for Thought series, as well as an author of three papers in the series, and gave a talk as part of the launch event at the Swiss Re Institute.

Nita trained in Medicine at the University of Newcastle, having obtained a First Class Honours degree in Immunology in an intercalated BMedSci. She trained in General Medicine and Diabetes & Endocrinology in Edinburgh, obtaining the MRCP. During a Wellcome Training Fellowship at the London School of Hygiene & Tropical Medicine, she was awarded a Masters and PhD. She specialised in Public Health Medicine in London and Cambridge. 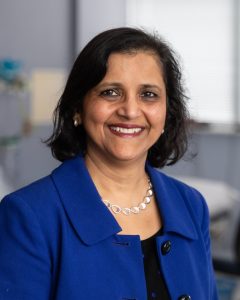