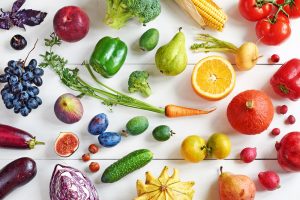 In this article for The Conversation, Professor Nita Forouhi, Dr Ju-Sheng Zheng and Professor Nick Wareham discuss research showing how indicators of dietary intake, metabolism or nutritional status that are present in our blood can help inform advice on healthy eating.

Eating about five servings of fruit and vegetables a day is widely promoted as a key part of a healthy diet. This is because consuming fruit and vegetables is linked to lowering the risk of health problems such as coronary heart disease, stroke and some types of cancer.

But there’s still confusion about the role that fruit and vegetables have in preventing type 2 diabetes. Evidence from research has been inconsistent, partly because most studies have relied on participants remembering what they ate – which can be inaccurate. But our latest research found that people who regularly ate more fruit and vegetables in their diet had half the risk of developing type 2 diabetes compared to those who ate less.

Since research shows that type 2 diabetes can be prevented through a healthy diet, we wanted to know just how important eating fruit and vegetables is as part of that. We conducted the world’s largest study that measured blood levels of vitamins linked to fruit and vegetable consumption in a population. This method of using objective nutritional biomarkers – indicators of dietary intake, metabolism or nutritional status that are present in our blood – cuts out the errors and inaccuracies that affected previous studies. We also asked people to report what specific foods they ate to compare with the biomarker data.

We followed a group of 340,234 people from eight European countries. We specifically studied biomarkers in 10,000 people who developed type 2 diabetes during follow-up and compared them with 13,500 people who didn’t.

The biomarkers we measured were levels of vitamin C and six different carotenoids or plant pigments in the blood. These biomarkers tell us about the fruit and vegetables a person gets in their diet. We then calculated the total sum of these seven nutrient biomarkers as a composite score, then split scores into five categories ranging from lowest consumption to highest.

Our findings build upon the results of a smaller study of 21,831 people living in England, 735 of whom developed type 2 diabetes. This study showed a strong link between higher blood vitamin C level and lower risk of diabetes. But the link was weaker when examining fruit and vegetable intake as reported by the participants. By repeating this work on a larger scale and in several countries, our results further strengthen evidence that these results are likely to be repeated in other populations, too.

Since UK dietary guidelines consider each portion of fruit or vegetable to be 80 grams, our study shows eating even one portion per day could have health benefits. For instance, seven cherry tomatoes, two broccoli spears, or one banana would all roughly equal one portion.

Although “five a day” has been around for decades, fruit and vegetable consumption remains low. Only one in seven people over 15 eat at least five portions everyday – and one in three people don’t eat any daily. Encouragingly, our results show there are large potential benefits from making small changes to our diets.

Our research highlights that reduced risk isn’t just because of certain nutrients or vitamins. Rather, the benefits we observed are because of the combination of multiple beneficial components found in fruits and vegetables. Alongside vitamin C and carotenoids, other components including fibre, potassium and polyphenols, which have beneficial effects on weight, body inflammation, blood sugar levels, and keep gut bacteria healthy. And a diverse variety of fruit and vegetables has the greatest health benefits, as you consume more of these beneficial components.

Read more:
A varied diet can prevent diabetes – but can you afford it?


We also took into account how several factors – including age, gender, body mass index, education level, occupation, smoking, alcohol intake, physical activity and use of vitamin supplements – all affected the risk of type 2 diabetes. We found that the biomarker results linked to fruit and vegetables were independent of these other factors – so regardless of whether a person smoked or was physically active, eating a diet rich in more fruit and vegetables is relevant for lowering the risk of developing type 2 diabetes.

Our research doesn’t establish cause and effect, because we did not intervene with dietary change – rather we observed what happened over time to participants with different blood biomarker levels. But, by using these objective measures and a large sample size in different countries with varying diets, our confidence in these findings is increased. We still don’t yet know whether our findings would be different among different ethnic groups, which should be a focus of future research.

It’s well known that fruit and vegetables are an important part of maintaining good health throughout life, but we also know that in reality the majority of people do not eat enough of them. Our study shows that even just a small increase in the amount of fruits or vegetables you get in your diet can significantly reduce your risk of developing type 2 diabetes.

This article is republished from The Conversation under a Creative Commons license. Read the original article.