Researchers from the MRC Epidemiology Unit are part of the international team behind a new report in The Lancet summarising the best evidence for effectively managing and preventing diabetes. This encompasses areas such as sustained weight reduction, reducing blood sugar, the use of risk-reducing drugs, better integrated care and structured lifestyle interventions

With 80% of diabetes cases now in low-income and middle- income countries (LMICs), 44 leading experts in public health, clinical care, epidemiology, and health economics – including seven MRC Epidemiology Unit scientists – were brought together in the Lancet Commission on Diabetes to review the evidence and develop proposals to close the gap in diabetes prevention and care.

Prevention, early detection, prompt diagnosis, and continuing care with regular monitoring and ongoing evaluation are key elements in reducing the growing burden of diabetes, but in LMICs evidence-based interventions are too often unavailable, leading to thousands of preventable deaths daily. Despite greater health-care investment in high income countries (HICs), similar barriers are faced by underserved populations within these countries.

Ahead of World Diabetes Day (14th November), the Commission published a new report in The Lancet  summarising the best evidence for effectively managing and preventing diabetes

Physical activity and dietary behaviour is driven principally by societal-level factors, and the increase in type 2 diabetes in LMICs is to a large extent the consequence of rapid changes in the physical and food environment, as well as cultural changes, resulting ultimately from globalisation and technological advances.  Recognising the diverse environmental, behavioural, and socioeconomic causes of type 2 diabetes, members of the Commission emphasise the importance of population-level action to prevent the disease, stressing the importance of education at all levels, as well as environmental policies that support collaboration between sectors to build healthy cities with clean air, water and foods, and infrastructure which facilitates physical activity.

They also propose a series of possible actions that could be implemented at supranational, national, regional, and local levels by governments and policy makers to influence type 2 diabetes risk factors, including sugar-sweetened beverage taxes, restrictions on unhealthy food advertising, and economic incentives to increase fruit and vegetable consumption.

The Commission report lays out the clear rationale for an integrated strategy for the prevention of diabetes that includes both individual- and societal-level approaches. It highlights the differences in how the evidence base for clinical interventions is established compared to that for interventions that impact on whole populations. Waiting for perfect evidence of effectiveness for policy level interventions is a recipe for inaction. The scale of the problem of diabetes globally demands bold policy-level action now, informed by observational evidence, followed by vigorous evaluation. ” 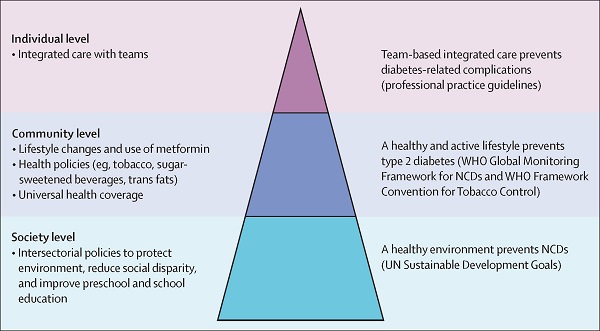 In an MRC Epidemiology Unit led paper published earlier this year in the Journal of Epidemiology and Community Health on the use of natural experimental studies – one of the key methods used to evaluate population health interventions – the lead author Dr David Ogilvie, a contributor to the Lancet Commission report, wrote:

The complex evidence needed to guide public health action is not necessarily the same as that which is needed to provide an unbiased effect size estimate. The practice-based evidence pathway is neither inferior nor merely the best available when all else fails. It is often the only way to generate meaningful evidence to address critical questions about investing in population health interventions.”