In an interview with Charis Goodyear originally published in the University of Cambridge’s ‘This Cambridge Life’ MRC Epidemiology Unit scientist Dr Raghib Ali describes how after growing up on free school meals at one of the lowest performing state schools in the country, he went on to become a leading epidemiologist and OBE awardee. He’s determined to improve the life outcomes of children from poor backgrounds so that they too can reach their full potential.

When I was about five years old, in Bedford, my father lost his job. Around the same time, he started to lose his eyesight due to glaucoma. This meant he wasn’t able to work, which led to financial difficulties for the family.

My mum started working and, over the years that followed, began taking evening classes as well as running the household. She hadn’t been able to complete her university education in India before she moved to the UK.

She was my inspiration. Even though I was young I think I knew that things were difficult and the best thing I could do to help was to do well at school – that would be one less thing for my parents to worry about.

I went to the school nearest to where we lived. In fact it was just opposite our house. There weren’t any league tables in those days, but I later found out that the school was in the bottom 5% for performance in the UK.

My parents were very encouraging − they always said I should do my best. They found out about a government assisted scheme to help children from poor families go to local private schools. I was successful in being awarded a place. And so, aged 11, I got a better chance at reaching my full potential.

I helped some of the other local children, who attended comprehensive schools, through their GCSEs and A levels. I was aware that they didn’t have the same opportunities as me. It was at school that I decided I wanted to be a doctor; I knew I wanted to do something that would help other people.

The chances of a child like me, who grew up on free school meals, going to Cambridge to study medicine were pretty much zero. I remember telling my father, who was in hospital at the time, that I didn’t think my interview for Cambridge had gone very well. He said: “don’t worry I’m praying you’ll get in and I think you will.”

He was right. A letter came to the house a few weeks later. My parents opened it and then telephoned the school. I remember being called out of assembly to be told the good news. I’ve always thought of myself, not as exceptional, but as the exception.

Not long after I became a doctor, I realised that many of my patients had diseases that could have been prevented, or certainly delayed, if risk factors had been addressed earlier on. This led me to epidemiology, which is the study of disease – what causes it and how to treat it – in populations.

Most of what we know about the causes and treatment of disease is based on studies of European or European origin populations. I’m particularly interested in researching chronic diseases like diabetes, heart disease and cancer in populations that have been understudied, for example people in the Middle East and South Asia and ethnic minorities in the UK.

Studying what I call “neglected populations” is important for scientific reasons but also for equality. We need this data to ensure we are giving people of all ethnicities the best possible chance of leading long and healthy lives.

Risk factors could be biological, behavioural, genetic or socioeconomic, to name just a few. It’s important to understand the interplay between different factors and the relative contributions they make to the development of a disease. 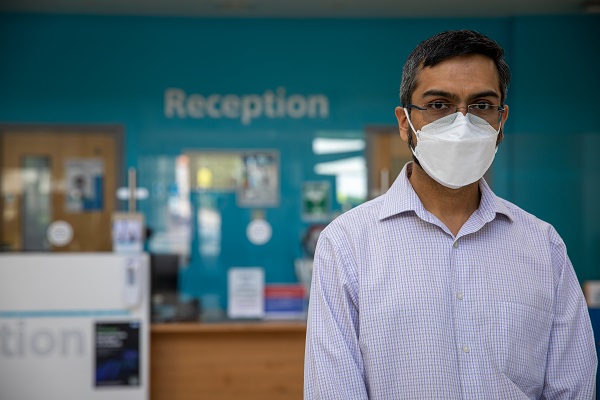 In March 2020 I was asked to work with the Government’s Race Disparity Unit and the Office of National Statistics to understand the relationship between ethnicity and COVID-19. We’d been concerned to see that people from most ethnic minorities were disproportionally affected by COVID-19.

There is a genetic component to the risk of death from COVID-19 in South Asians. However, our research suggested that disparities in mortality were mainly due to the likelihood of infection in the first place rather than the outcome once infected. Socioeconomic factors driving infection rates included people’s occupation, housing, household size (especially if multi-generational) and where they lived.

I advocated for addressing these risk factors that are related to social injustice and poverty. Although I’m best known for my work on ethnicity, my research is increasingly driven by my desire to reduce social economic inequalities – these are what determine the big outcomes in health.

The most deprived people in the UK have higher rates of all the chronic diseases; life expectancy is ten years lower. We’ve known about the effect of poverty on health since the Black Report over 40 years ago and still, throughout successive governments, little has changed. It’s an indictment of our system.

I’d like to see government working with individuals, families and societies on a local and national level to provide interventions, education and equal opportunities from an early age. This is critical or the gap between children’s life outcomes will just get bigger and bigger until it’s too hard to close.

I’ve recently been appointed Chief Medical Officer and Joint Chief Investigator at Our Future Health. We’re working to prevent and delay disease across different populations in the UK by identifying at-risk individuals and providing them with early interventions.

I know I’m lucky; my life trajectory could have been very different. That’s why I’ve always had a strong desire to give back. During the pandemic I returned to work in the emergency department in all four waves to help my colleagues deal with COVID-19.

It meant an increased risk to myself and my family. Not to mention using a different entrance, sleeping downstairs, stripping off the scrubs when I got home and putting them straight into the washing machine, and hardest of all, seeing less of my family.

By this point my father was fully blind and very frail due to his lung condition but at least we could talk. After being on the ward I’d wait two weeks to make sure there was slim chance of passing on COVID-19 before going to see him. We’d sit in the garden and hold hands. Fortunately we were able to celebrate his 80th birthday in the summer. I’m grateful we had that time.

Sadly, my father didn’t live long enough to see me awarded the OBE for services to the NHS and the COVID-19 response. But I know he would have been very proud.

Dr Raghib Ali is Senior Clinical Research Associate at the MRC Epidemiology Unit, an NHS Consultant in Acute Medicine and Chief Medical Officer of Our Future Health. He is an alumnus of St Catharine’s College.