Mohammad Manzur Shaif Sayeem was a PhD student at the Global Diet and Activity Research Group and Network (GDAR) with generous support from Wolfson College Cambridge, who completed his PhD in 2021. He was supervised by Professor Nigel Unwin. In addition, the dietary aspects of his research is supervised by Professor Nita  Forouhi, Programme Leader of the Nutritional Epidemiology programme at the MRC Epidemiology Unit, and qualitative research components by Dr Shahduz Zaman, Senior Lecturer at the Department of Global Health and Infection, University of Sussex. He worked on determinants of physical activity and dietary transition in rural to urban migrants living in urban slums of Bangladesh.

Sayeem’s PhD research focused on understanding of diet and physical activity transition in the rural-to-urban migrants, and the determinants influencing these changes in Bangladesh where he is originally from. This research is important as it will inform development of an effective population level intervention plan as well as effective health policies for low income migrants in Bangladeshi slums. This project was being undertaken within the context of similar new work led by GDAR in Africa and Caribbean, and its findings will inform policies across multiple sectors in those countries aimed at the prevention of NCDs.

Before joining the unit, Sayeem worked as a Lecturer at the School of Life Sciences at the Independent University Bangladesh and Senior Lecturer at the East West University Bangladesh teaching 3rd and 4th year undergraduate students since he finished his MSc in Pharmacogenetics and Stratified Medicine from the University College London (UCL). He is a geneticist with a First Class undergraduate degree from the University of Dhaka who also started his PhD at the Department of Pharmacology of the University of Cambridge in 2015. He took a bold decision after that and left that programme within the first 3 months to explore his real interest to make an impact on the life of the people in need from Low Income Countries (LMICs) and especially on their risk of Non-Communicable Disease (NCDs) due to dietary and physical activity behaviours. This led him to gain another Masters in Public Health Epidemiology part time while carrying his academic duties in Bangladesh. 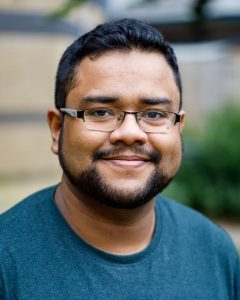