ITHIM refers to a range of related models and tools developed at CEDAR to perform integrated assessment of the health effects of transport scenarios and policies at the urban and national level. The health effects of transport policies are modelled through the changes in physical activity, road traffic injury risk, and exposure to fine particulate matter (PM2.5) air pollution. Some versions of ITHIM also predict changes in CO2 emissions. ITHIM is being used in research and by health and transport professionals to estimate the health impacts of scenarios, compare the impact of travel patterns in different places, and model the impact of interventions. ITHIM works either as a stand-alone model, or it can be linked with other models (e.g. transport, health, economic). 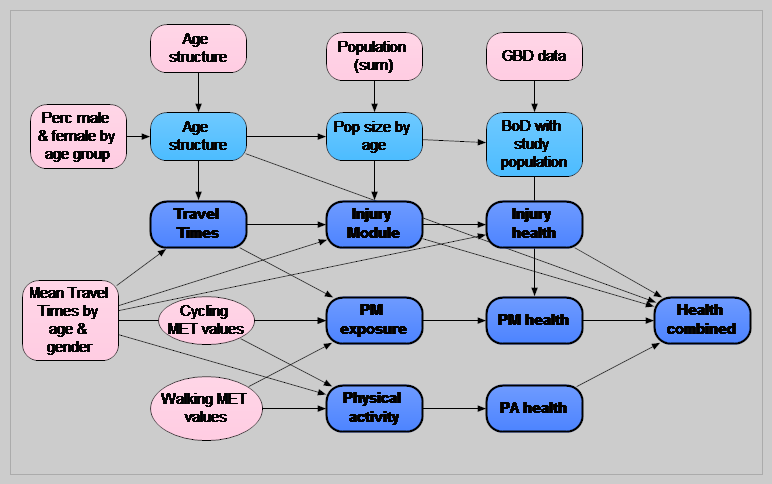 ITHIM models exposure to physical activity by comparing distributions of weekly physical activity under different scenarios. Walking, cycling and other types of physical activity are combined as MET hours per week of activity. Outcomes affected by physical activity include various cardiovascular diseases, depression, dementia, diabetes, breast cancer, and colon cancer. ITHIM also models health changes through the all-cause mortality. A comparative risk assessment method is used to estimate how changes in population physical activity result in changes in health burden. In the most recent versions this is being replaced with a multistate life table model.

Road traffic injuries are modelled using a risk, distance and speed based model. Differences in risk by gender and age are also included. This approach allows ITHIM to look at how absolute numbers of injuries and injury risks could change for different transport modes as travel distances between modes changed.

Fine particulate matter (PM2.5) air pollution risks are calculated for the general population (background rates) as well as mode specific rates for different transport modes. The exposure changes for population are based on comparison of local generated PM2.5 emissions and concentrations in the study area. In ITHIM version 2 also the personal exposure to air pollution while walking and cycling is taken into account.

The health effects of ITHIM are presented as disability-adjusted life-years (DALY) and number of attributable deaths. Background burden data for study areas are estimated from Global Burden of Disease studies.

Below are listed the main ITHIM versions

We are moving towards making all our models open source.

GLASST has received funding from the European Research Council (ERC) under the Horizon 2020 research and innovation programme (grant agreement No 817754). This material reflects only the author’s views and the Commission is not liable for any use that may be made of the information contained therein.

We are collaborating on many international research and policy collaborations involving ITHIM these include:

ITHIM is currently used by several researchers and authorities in number of cities, regions and countries (including USA, Canada, Malaysia, Brazil, India). ITHIM email list is the list in which developers of ITHIM will share the news from ITHIM community with other users and interested parties. We expect to send one email every 2-3 months.

If you would like to unsubscribe from future mailings, please fill in the form below.

If you would like to use ITHIM in research or for policy development please email James Woodcock.